You were way ahead of your time in teaching creativity. What’s the story?

One of the key figures is Alex Osborn, who is perhaps most famous for popularizing brainstorming as a creative technique. He also did work in the 40s and 50s on creativity education and published several books on how to harness creativity. Osborn’s wish was not only to make companies more creative. He also saw a great need to make creativity a part of the educational system. In the book Applied Imagination he outlined a creative process he called creative problem solving, which has been a major influence in our education ever since.

Together with the educator Sidney Parnes he founded the The Creative Education Foundation in 1954, which later became a part of Buffalo State College. Sidney Parnes, an educator, joined him to help realize his vision for education. To see if an educational program in creativity was justified, Parnes conducted a study together with Ruth Noller, another key figure in our history. They found that the creative problem solving process had a great impact, not only on the students’ creative ability, but also on their academic performance in general. And so, in 1967, the first graduate courses in creativity were taught here at the college. So we’ve been around for a while. We’ve just graduated our 500th student. 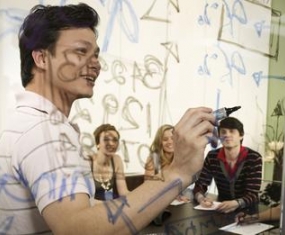 What do your students learn during their education?

Our education has always been theory based and it’s important that our students know the history of creativity research and how the field has evolved over the years to include new areas and theories.

When it comes the actual creativity training, we offer courses that focus on all of the different parts of the creative problem solving process, which includes tools to stimulate divergent and convergent thinking as well as creativity assessment and idea evaluation techniques. The goal is to teach our students a process that leads to ideas that are both novel and useful.

But it’s not just about the tools and methods. It’s just as much about attitude. We try to encourage our students to be playful and open to ambiguity. This is where the environment’s influence on creativity comes into play. A lot has happened in creativity research since the 60’s when the focus was mainly on the individual, and the field today includes a lot of research that focuses on the impact of environment on creativity. We teach our students to defer judgement and try to have have a positive attitude towards other people’s ideas.

Another important part of this is the role of creative leadership. Many CEO:s still have a very top to-bottom-attitude towards creativity and change. We want our students to be able to go into a company and convince leaders of the importance of not just boosting their own creativity, but to democratize the conversation and include more people in the creative work. So we also offer courses in creative leadership. I wrote a book a few years ago together with my colleagues Gerard Puccio and Mary Murdock called Creative Leadership, which is now part of the curriculum.

What’s are your thoughts on the connection between creativity and innovation?

There’s a lot of talk about innovation today but few ask the question how creativity can be a starting point for innovation. A few years back we participated in a competition initiated by the state of New York. The task was for each region to come up with an economic development plan, including how to create jobs and encourage companies to move their business here. One problem that our state has is that the taxes here are higher than in many other states. In order to secure the economic development of the region it’s important to find ways to make our state attractive for businesses.

Committees were set up across the state and different groups tried to come up with ideas on how to solve this problem. Our region used creative facilitators from our department and won the competition for the best plan and received 100 million dollars to implement it. They even impressed the governor of New York; he remarked about how well the many individuals worked together. I think this demonstrates how people with training in the creative process and creative facilitation can play an important role in achieving innovation. Many of our former students have gone on to work as creativity facilitators in large corporations.